Kamil and his teammate Bradley Ellison are blazing a trail for the UK as they will be the first ever apprentices to represent the UK on the international stage in Industry 4.0.

Participation in this new competition at EuroSkills Graz is part of WorldSkills UK’s commitment to adapt its skills portfolio to reflect the priorities of the UK Government’s industrial strategy and Kamil is delighted to play his part.

“I first got involved in the WorldSkills UK Mechatronics competition when I was studying at the UTC in Sheffield and I continued competing when I started my apprenticeship at Toyota Manufacturing Ltd” explains Kamil.

He then made the decision to switch to the Industry 4.0 competition because “I felt that excelling in this new area would help me get ahead in my career and it really is quite an honour to be part of the first team to represent the UK in this important skill area” adds Kamil, who has recently completed his four-year apprenticeship with Toyota and is now a Maintenance Team Member at the automotive manufacturer.

Kamil describes his current role as multi-skilled as he is required to fix every aspect from mechanical and electrical to software issues on the production line. WorldSkills UK Competitions play an important role in Toyota’s apprenticeship training programme with the activity being used as a tool to develop the apprentices’ skills to an international standard, and the company has a strong tradition of being represented in Team UK and excelling in international competitions.

Kamil is keen to highlight how supportive Toyota has been of his involvement in WorldSkills UK Competitions, enabling him to train on site in dedicated areas and take time away from his role to complete training sessions with his Training Manager, Marcin Regulski who works for Festo Didactic. This has made Kamil determined to give it his all and train even harder for the EuroSkills Competition.

“When they said I had been selected to join Team UK, I was so happy as I hadn’t been expecting it. This is my second time competing for a place in Team after switching from Mechatronics” explains Kamil. He adds: “Im slightly nervous as none of us know what to expect with the competition being new, but we are training in a range of different areas that we might be tested on and I’m really focussed on developing my skills, knowledge and competition readiness ahead of January.”

WorldSkills UK Competitions have been a key part of Kamil’s apprenticeship training for the last four years and were also an important development tool when he was studying for his Level 3 in Engineering and A Levels in Physics and Maths at the UTC in Sheffield. This has made Kamil want to encourage more young people to get involved in WorldSkills UK Competitions. He says:

“When I first started at Toyota, I felt I had a head start because of all the things I had leant whilst competing and I believe I became a better apprentice as a result. It’s a great journey to be on and I would say to anyone starting their apprenticeship get involved with WorldSkills UK!”

EuroSkills Graz is currently postponed due to COVID-19. 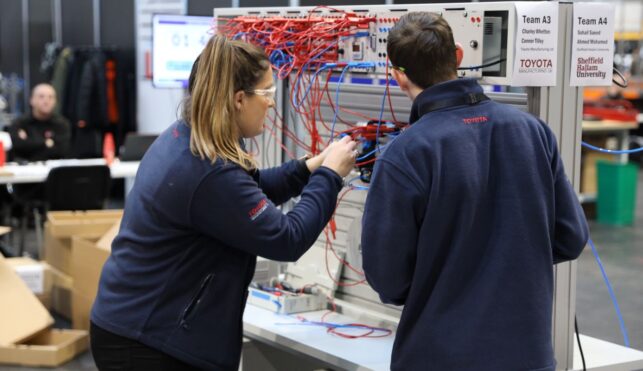