Celebration was the order of the day over the weekend with the Royal Wedding and we have continued the celebrations into this week with the announcement of Team UK for EuroSkills Budapest!

Twenty-two young women and men, apprentices from across England, Scotland, Wales and Northern Ireland, will be competing in Europe’s largest skills competition to determine the best-of-the best in sectors vital to the economy: from engineering to construction, creative to digital. Having demonstrated their brilliance at the WorldSkills UK national finals in November 2017 and gone through months of further training, they are now facing four months of intense preparation before making the trip across to the Hungarian capital. They will be striving to ensure Team UK is ready to defend our top 10 standing from the most recent EuroSkills competition, which took place in Sweden two years ago.

However, before all the hard work starts,  it really is important to celebrate what our team of 22 have achieved so far and reflect on what last year’s Team UK achieved in the global finals in WorldSkills Abu Dhabi. That’s why we brought together our friends and supporters for a special reception in the House of Commons this week.

It was a great occasion and it demonstrated the sheer breadth of support that Team UK and the wider WorldSkills UK family enjoys. The Westminster Education Select Committee Chair, Robert Halfon, spoke of how Team UK was ‘at the front of the army’ of the skills economy and said he was looking forward to EuroSkills more than the World Cup – I wholeheartedly agree! The DfE Apprenticeships and Skills Minister, Anne Milton, said that being in Abu Dhabi for the Skills Olympics last October was amongst the top 10 moments of her 13 years as an MP. I think Anne captured the essence of what these international skills competitions are about: seeing really is believing and when you see the blood, sweat and tears that Team UK go through to win their medals and medallions it creates an impression to last a lifetime.

We also heard from members of the Abu Dhabi and Budapest teams. Daryl Head and Betsy Crosbie told of how making it to Team UK and achieving the world-class standard had been a game-changer for their careers and confidence. Nineteen-year-old Collette Gorvett of Gower College Swansea told of her excitement of learning that she’d made it into the team for Budapest and of her determination to succeed. I’ve no doubt that Collette and her teammates will show the best of British this autumn!

With all things Brexit dominating the news, it hasn’t escaped people’s attention that this EuroSkills will be our last as members of the European Union. Our participation in EuroSkills is totally independent of EU membership, so we will be taking part in future European championships as normal, starting with Austria in 2020. But this year’s EuroSkills is important in the context of Brexit as it represents a big stress-test of our skills system as we  leave the EU. As Robert Halfon pointedly referenced at our reception in Parliament, there is a ‘crisis on skills street’ and benchmarking our competitiveness  in comparison with our European neighbours is absolutely critical. A successful Brexit is going to depend on having the right numbers of young people with the right levels of skills. This matters, as our recent history as a skills nation has been one of reliance on imported labour, much of which from EU nations, to fill skills gaps. Brexit means that the availability of this labour will be lower than it has been over the past 15 years.

We also need to demonstrate to our international partners that the UK is a world-class place to do business. In the years ahead, our economy is going to be more dependent on securing global trade deals. This investment will only be made if governments and business see a thriving skills base in which to base their enterprises. We’ve done a good job of this through international skills competitions in recent years, including finishing ahead of France and Germany, but these and other major EU nations have a track-record of investing more in technical skills than the UK has done in recent years, and their investment is set to keep pace with this trend in the years ahead. That’s why increased funding in skills from governments across the UK is so welcome and why new approaches to technical education  and improved careers strategies will make such a big difference. If we don’t invest more, we will stand still – and standing still means we will fall behind.

So as we gear up for EuroSkills later this year, let’s do three things. Let’s celebrate the achievements of our incredible young people who represent nations across the UK so brilliantly; let’s ensure that skills are governments’ number one priority to ensure that we are best placed to achieve a successful Brexit; and most importantly, let’s get ready to cheer Team UK onto another medal-winning performance in Budapest! 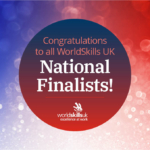